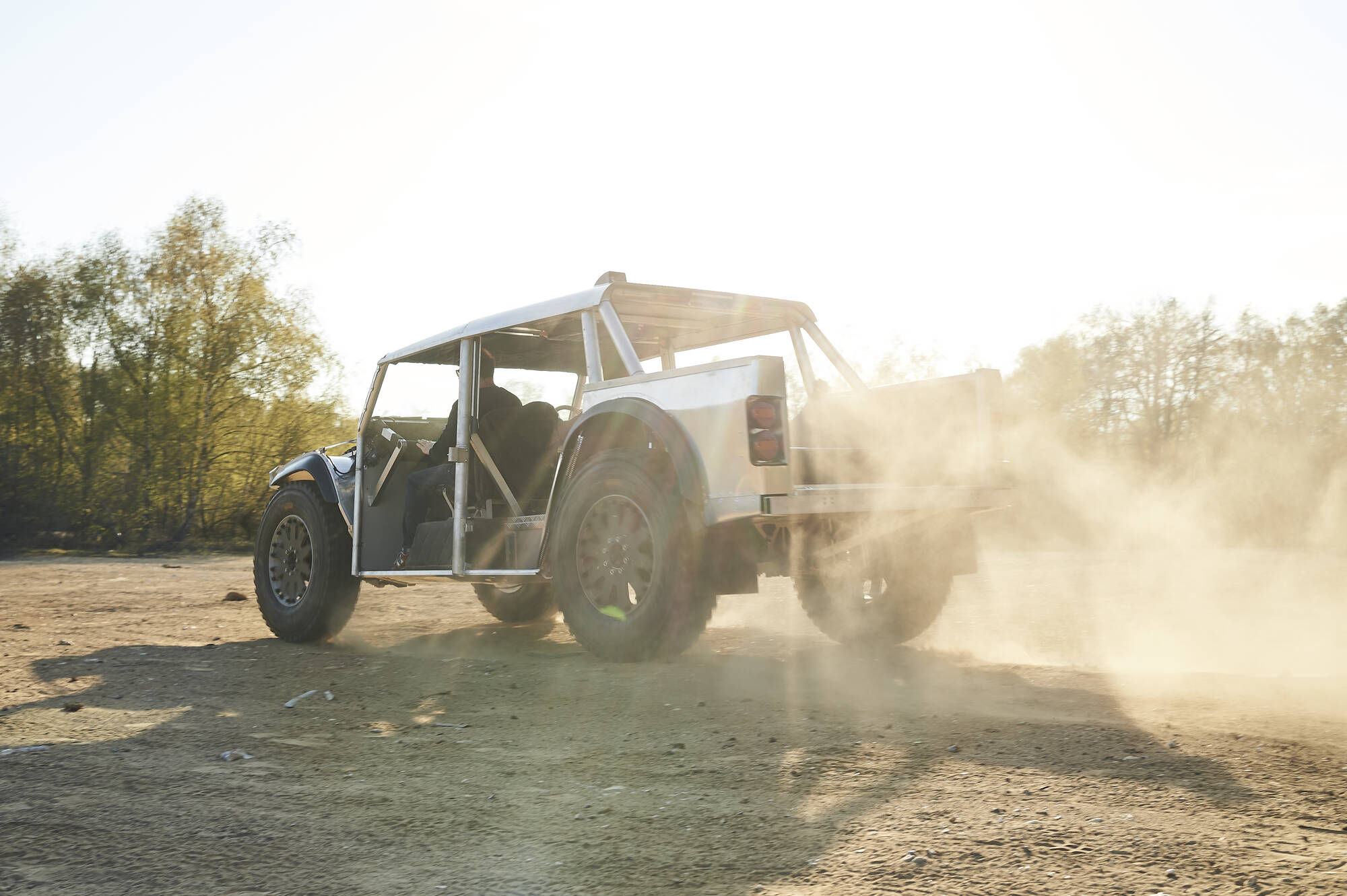 Lifesaving, not lifestyle;
expeditions rather than exhibitions
– introducing the Fering Pioneer

An all-new British company has launched an adventure vehicle which tears up the rule book with a sustainable electrified pick-up which is designed to take on the toughest of terrains while treading lightly on the planet.

The Fering Pioneer is the brainchild of ex Ferrari and McLaren engineer Ben Scott-Geddes, who has repurposed supercar and racing technology to provide environmental responsibility and unrivalled off-grid capabilities for the most extreme adventures.

Despite its imposing appearance, the Pioneer is no larger in any direction than a typical delivery van and is actually shorter than a Ford Mondeo Estate. It also weighs the same as a family hatchback.

Power to the axles is provided solely by two electric motors – unusual for an off-road vehicle. But they are perfectly suited to the task, providing instant torque, controllability and reliability. They provide a total of 600Nm of torque; more than a comparable diesel 4×4.

A battery provides a zero local emission, electric-only range of around 50 miles. The Pioneer’s range extender generator is then available to give ability to keep going to the end of your adventure.

The Pioneer’s battery cells are not the same as you’d find in a conventional EV, as the usual Lithium-Ion chemistry is affected significantly by extremes of weather. Instead, Fering have used more sophisticated Lithium Titanate Oxide cells which are designed to survive extreme weather conditions.

For longer adventures, the battery is supported by an 800cc 3-cylinder range extender combustion engine powered by biodiesel. By operating consistently at its most efficient level, the engine generates power to run the motors and charge the battery in normal driving. This means the battery can cover peak demands for power – such as hill climbing – using energy reserves which are then replenished while the vehicle is cruising, stationary or braking.

Using advanced materials and techniques from the circuit and supercar has allowed the Pioneer to rewrite the rules on strength and lightness too. The dry kerb weight is around 1,500kg – the same as a medium-sized hatchback.

This has been made possible by using an aluminium spaceframe with composite elements, while the exterior panels are made of tough fabric. This material, which is similar to the canvas found in high-end hiking boots, can shrug off damage, is easily replaced and has better insulation properties than metal skins.

Despite this, the Pioneer is capable of carrying its own weight as a payload, with a 1,500kg capacity.

The combination of light weight and an efficient powertrain results in exceptional fuel economy. Even with the batteries discharged, the Pioneer is expected to deliver around 50mpg – half the consumption of other 4x4s, and comparable to a diesel hatchback.

The efficiency also means the Pioneer can have an incredible ability to live ‘off-grid’ and survive expeditions to remote areas without having to worry about refuelling. With long-range tanks fitted, the Fering will be capable of driving for 7,000km without needing a fuel stop or recharging from the grid.  If such extreme range isn’t needed for the mission, the tanks can be swapped for water to provide fresh supplies on a mission.

As the Fering isa vehicle is designed with adaptability in mind, it can easily be modified or upgraded to suit the customer’s needs and intended purpose. Bigger batteries, and different range extenders can be used, such as alcohol-fuelled engines in Brazil or a fuel cell in Asia. The combination of a battery and generator also makes the Pioneer ideal for emergency service use, where electrically-operated rescue equipment and lighting can be used in remote locations.

This adaptability means the Pioneer is not expected to have an ‘end of life’ which will require it to be disposed of and recycled. It is easy to repair and upgrade giving it an indefinite life span. Should it ever need to be recycled, there is far less material to recover than a comparable 4×4 vehicle or even a similar sized van.

Further examples of the ingenious thinking which has gone into making the Pioneer ‘extreme adventure ready’ include the choice of tyre. The 22.5-inch rims aren’t just bling which is designed for the boulevard – they accept standard size truck tyres to ensure easy availability in the remotest areas of the globe.

The Union Jack symbol moulded into the tailgate isn’t just to proudly signify the Fering’s British heritage either. The bars of the flag act as strengthening ribs to ensure rigidity in the panel.

The first prototype Pioneer is already going through a rigorous testing process and being assessed by early customers and organisations. Series production will start in the UK during the first half of 2022.

The team behind the Fering Pioneer

Ben Scott-Geddes
Previously Director of Innovation, Body In White at Ferrari, Fering’s founder Ben has a history of creating and developing pioneering new automotive technologies and vehicles. He was formerly Head of Advanced Concepts at McLaren and Technical Director of Caparo Advanced Composites, where he was responsible for the record-breaking T1. He worked under Gordon Murray building the McLaren F1, the F1 Le Mans winners in 1995 and subsequently the winning BMW V12 LMR in 1999.

David Seesing is an experienced design manager with a long history of working in the automotive industry, delivering concept and production vehicle designs. His prior design roles include work for Bentley, Bugatti, Daimler and TVR, leading the design development of the TVR Griffith. David holds an academic position at the Royal College of Art.

Chris Wright is a specialist in advanced composite construction, with experience of working in automotive and marine. He has been involved in building power boats and racing yachts, most recently with Sunseeker International. In automotive he has worked with Aston Martin, Caparo, McLaren and Mercedes-AMG.

Mac MacKenney is one of the world’s most accomplished automotive expedition leaders. Since 1996 he has planned, trained, equipped, supported and led teams on expeditions throughout the world. Mac is also Founder and Director of Driven to Extremes, an organisation that supports military veterans suffering from PTSD by taking them on challenging vehicle adventures and expeditions.

Chris Brady is an engineer, designer and entrepreneur. He founded and built Acro Aircraft Seating to a world-leading position, securing BGF funding and winning the Sunday Times Fast Track 100 Award in 2017.

Will Archer is an entrepreneur, investor and start-up specialist. He has built global businesses in research, consulting, recruitment and benchmarking. Will has extensive advisory experience with government agencies and education providers worldwide.